Something happened last week that literally cracked my heart open. I’m sharing this with you in the hope that you might allow your heart to open a bit more too.

Last week saw one of the world’s worst terrorist attacks in over a decade. 300 people were blown up in a capital city, many of them in their twenties and thirties. There was no safety check-in on Facebook like there is when there is an attack on any Western country. Nobody changed their Facebook picture to the flag of the country where it occurred. In fact, outside my mum, I didn’t see one friend write a post with a prayer for that country. This was because that attack took place in Iraq. 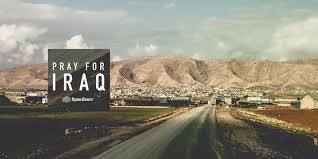 I spent the majority of last week uncharacteristically angry and upset about the lack of support for the people of Iraq. Something was eating me and I couldn’t let it go. But I came to realize that it’s not directly the fault of the people of the West that we didn’t show solidarity for Iraq in the way that we usually do when there is an attack on a Western country. It’s that we have allowed the media to dehumanize the Middle East for us, and we continue to drink that Kool Aid, no matter how open minded or liberal we consider ourselves to be. I also realized that my work and life and brought me into such close contact with a great number of people from the Middle East, that I’ve had the luxury of breaking down the media and Hollywood stereo-types that also existed in me, and that others may not have had that same luxury.

When We Are Prejudice and we Just Don’t Know It

I always considered myself to have a really high standard in equality. I grew up in a pretty racist town in the north of England, and I remember taking a stand against racism when I was 9. That was the first time I met someone from another race in a town that was almost all white. A young boy came to my school from India and as the only foreign national, he became the center of attention. The other kids weren’t excessively mean to him, but they often taunted him with a parody of an Indian comedy TV character. I joined in once for one sentence and it cut my heart like a knife. I realized that it was inherently wrong and from that moment on I made the decision to stand against racism (although I didn’t know that was what it was called back then), and I consistently did so thought out my childhood and adult life.

Fast-forward almost 30 years to the success of my second book and I was invited to teach emotional trauma work in the Middle East. My reaction  made me look deeply within and realize that despite my liberal outlook, I still had an extremely stilted and prejudice perception of the Middle East. In fact, I think it was conjuring up images somewhere between Lawrence of Arabia and a Taliban stronghold.

Despite being very well educated and considering myself liberal and open minded, here are some of the prejudices that I openly admit ran through my mind when I was invited to the Middle East:

Judging by the reaction of my friends and family when I said I’d been invited to the Middle East, I know I wasn’t alone in my perception. People around me reacted with the same prejudice I’d shown internally. They were worried for my safety and they told me to “be careful out there.” Some were extremely angry that I was going at all. One friend told me with disgust that, “Conscious people boycott these places.” And it’s true, I’d also boycotted several Middle Eastern countries in the past too.

Despite my reservations, something inside me was calling me to go. Here’s what I actually found when I arrived:

Spending a significant amount of time in the Middle East helped me to realize just how much I had allowed my perception to be shaped by the media. I returned on several occasions and even called it home for a while. Just to be clear though, I was still pro-peace in the Middle East. I still supported an end to all war too. But I stopped demonizing the people or adhering to a single stereo-type. I saw with my heart, rather than my conditioning.

Fast forward several more years and I met the love of my life in New York: the funniest, most charismatic, charming, loving, kind and brilliant man I ever met in my life. It was love at first sight and like something straight out of a movie when we met. We literally kissed before we spoke to each other and moved in together on the day that we met. We didn’t ask each other where we were from right at the start. It wasn’t even relevant to us.

It’s funny, it’s only from the outside that others consider us to be in a “mixed race” relationship. We don’t even think of it that way. The irony is that despite growing up in seemingly different worlds, we are more similar to each other at heart than anyone else that either of us have ever met. My partner was raised in a strict Muslim, Middle Eastern country with very religious parents, while my parents where ex-catholic and ex-christian and both pretty atheist in nature. But these aren’t the things that are at the forefront when you fall in love with someone. In fact, they aren’t even really considerations. They are just facts about a life that went before. We are more interested in the places that our hearts meet than the contrasts that others might see.

Because we never thinking about our differences, I forget that the same ease isn’t shared by our fellow Americans in general. I know this to be true because when people who haven’t met my partner ask where he is from and I tell them, they often act in a way that reveals their own prejudice too. Whether it’s repeating the name of his country back to me in a high-pitched tone with raised eyebrows or giving me a concerned or questioning look, you don’t have to be good at reading people to tell that there are questions running through their minds that they are too polite to ask, or that they have some kind of concerns for me.

I totally get it. Maybe, before my time in the Middle East I would have done the same. But now, if we are really stirring up the race issue in the US and taking a stand for the prejudice that still exists here and in the rest of the West, I’m wondering if we are ready to look deep within, especially those of us who consider ourselves to be open-minded and liberal, and ask if the prejudice still exists somewhere in us. Are we able to admit that we heard about the bombing in Iraq and it didn’t touch us in the same way as the attacks on, say, Belgium and France? Are we willing to face that part of ourselves that we allowed to be conditioned and programmed by Hollywood and the media?

If we are even a tiny bit willing to admit to ourself that we hadn’t cared about that attack in Iraq in the same way as other terror attacks, then without shaming or blaming ourselves, maybe we can start to crack our hearts open just a little bit more. Maybe it can be the beginning of realizing how, when it comes to the Middle East, we haven’t been taught to think freely for ourselves and we’ve been dictated to by a media puppet show. Maybe, just maybe, we can allow ourselves a little bit more freedom of thought than what we have been granted so far. Maybe we can end our prejudices just a little bit and see more of our similarities rather than our differences.